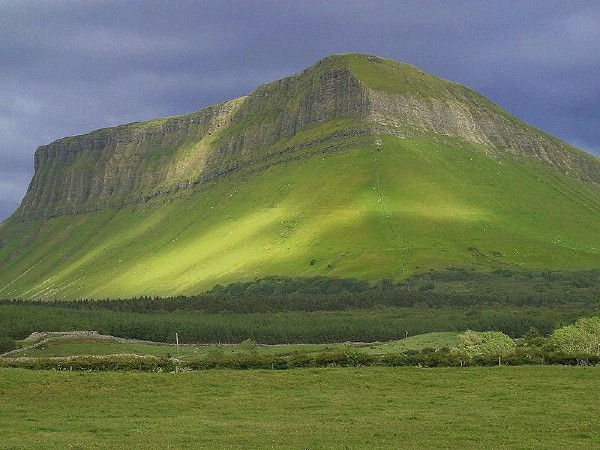 The massive bulk of Benbulbin sits like the upturned hull of a ship amid Sligo's stonewalled pastures. Near the mountain top, the steep slopes give way abruptly to cliffs - sculpted by the weather to resemble a concertina - that rim a flat summit 1000ft (300m) above the plain.

Benbulbin looms large in Irish myths too. It was on the mountain's slopes, legends relate, that the Celtic warrior Diarmuid met his end. He had eloped with Grainne, the fiancee of the giant Finn MacCool who built the Giant's Causeway, and the unforgiving Finn tricked Diarmuid into a fatal fight with an enchanted boar. It was here, too, that the 6th century St Colmcille (Columba) led 3000 men into battle( St Colmcille, it is said, led an army onto Benbulbin's slopes - to settle his right to copy a psalter lent to him by St Finian of Movilla). And it was to the protection of Benbulbin that the Irish poet W.B. Yeats turned when he chose it as his burial site; shortly before his death in 1939, he wrote:

St Colmcille, it is said, led an army onto Benbulbin's slopes - to settle his right to copy a psalter lent to him by St Finian of Movilla.

Over the next few years, Haskett Smith returned to Wasdale Head and made increasingly difficult climbs. Then in 1886, he put British rock climbing firmly on the map, when, wearing his usual nailed boots, he climbed Great Gable to the base of a sheer pillar known as Napes Needle. After inching his way up a crack in the rock, he then, 'feeling as small as a mouse climbing a milestone', scaled the boulder capping the pillar.