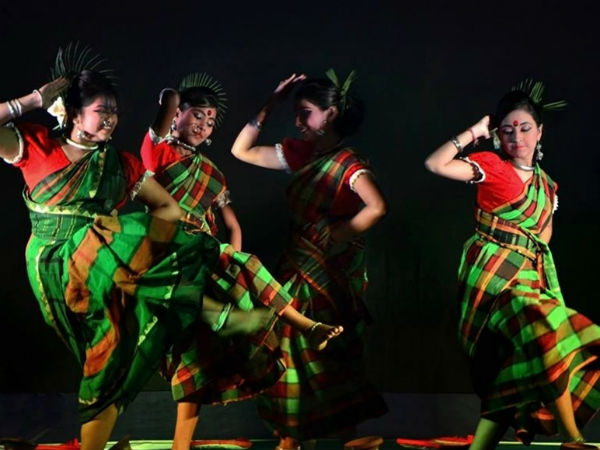 The land of hill stations, Himachal Pradesh has a lot more to be savoured and a very few travellers, especially those who prefer travelling offbeat, know about this. If you think Himachal Pradesh is all about mountains, hills, forests and valleys, then you still haven't witnessed its actual beauty, which lies in its age-old culture and traditions. Yes, you can savour the entire Himachal Pradesh only if you walk through the trails of its villages and small towns which have been in existence for centuries and get well acquainted with their lifestyle. Traditional dance is an important part of the Himachali culture. Hence, we have listed down the 5 major traditional dances of Himachal Pradesh that showcase the rich culture of the state.

One of the most popular dance forms in the state, Nati is a folk dance which is believed to have originated in the Sirmaur district. However, it is also a popular form in the Kullu and Shimla districts of the state. It is generally of seven types and is performed during cultural programmes.

Did you know that Nati holds the world record as the largest folk dance in the world and is listed in the Guinness Book of World Records. So, don't you think you must witness this beautiful form of dance? Nati is also popular in a few communities of Chandigarh and Uttarakhand.

Also known as Chhambha or the Rakhshasa Dance, the Demon Dance is another form of traditional dance in Himachal Pradesh that reflects its beautiful culture and simple lifestyle. It has a history dating back to thousands of years and is said to have originated in the Kinnaur region of the state.

It is performed by men and women wearing demon masks while holding each other's hands. The dance group is guided by a leader called Ghure. The Demon Dance generally represents the situation of demons attacking crops and crops being guarded by gods. You must witness this mesmerising celebration while in Himachal Pradesh.

Kayang Mala is a dance form in which dancers form a garland-like pattern by weaving each other's arms and becoming beads of the garland. Every performer is well dressed and heavily decorated with jewellery. Before commencing the dance, they are supposed to drink Chhang, which is a local drink.

Today, Kayang Mala is one of the most popular traditional dances in Himachal Pradesh, and hence you shouldn't miss out on exploring its beauty. So, pack your bags and be on the route leading to the villages of Himachal Pradesh now!

Shand and Shabu are two popular dance forms in Himachal Pradesh which are generally performed at Buddhist monasteries in the loving memory of Lord Buddha. They are said to have originated in the Lahaul and Spiti district of the state.

However, they are also performed by locals after the harvesting of crops is finished. During their performances, several musical instruments, such as drums and shehnai, are played. Nowadays, they have also started using the violin.

It is one of the oldest-known dance forms in the state. As per locals, it is said to have been in existence for centuries. It is a unique dance form which is performed after the killing of a tiger. During its celebration, the skin of the animal is stuffed and its nose is decorated with gold ornaments. After it is done, the locals of the region dance around the dead animal. Over a period of time, it has become a popular dance in Himachal Pradesh.