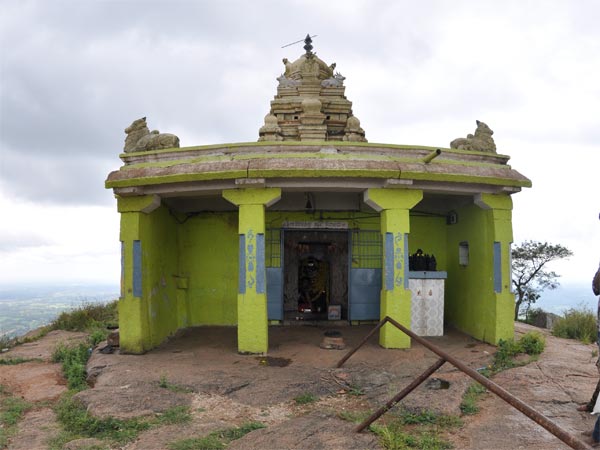 Shivagange is a hillock that is situated near Dobbspet in Bangalore rural district, Karnataka. It is at a height of 2640 feet above sea level. This revered mountain is shaped like a Shiva linga, which is a form of Lord Shiva. There's a spring that flows nearby, which is called Ganga, thereby warranting the name "Shivagange".

Historically, this place was under the control of Hoysalas. The Queen of Vishnuvardhana, Shanthala Devi, threw herself from this hill out of depression. The place is now identified as Shanthala Drop. Later, during the 16th century, this hill was fortified by Shivappa Nayaka.

This fort is now in ruins. It is said that Kempe Gowda, the founder of Bengaluru, later enhanced the parts of the fort and had tucked away part of his treasure in this fort.

Shivagange is also called Dakshina Kashi (Kashi of the South) due to the presence of so many temples that add to the sanctity of the place.

Summers are excruciatingly hot, and there is no green cover to help in escaping the heat. Monsoons can be tricky as theterrain gets slippery. It is best to avoid visiting Shivagange in the monsoons. The winter season from November to February is the best time to visit the place.

How To Reach Shivagange?

By Air: The Kempe Gowda International Airport in Bangalore, which is at a distance of 60 km from Shivagange is the closest airport.

By Train: The nearest railhead is in Dobbspet, which is about 8 km away from Shivagange. There are 4 trains that ply from Bangalore to Dobbspet. The average travel time is 1 h 15 min.

By Road: Bangalore - Makali - Shivagange is the only route to get to Shivagange. This route passes via NH 75 and NH 48. It takes an hour and a half to reach. The distance is 51.3 km.

Pick up all the essentials such as food, water bottles and camera batteries in Bangalore and kick-start the journey. ISKCON, which is on the way to Shivagange, is a temple ascribed to Lord Krishna. It was inaugurated in 1997 by the then prime minister Shankar Dayal Sharma.

The Beauty Of The ISKCON Temple

The temple is perched atop the Hare Krishna Hill. It houses Lord Venkateshwara, Lord Balaram, among many other deities. This ISKCON temple in West of Chord Road is one of the largest temples in the chain of ISKCON temples.

Next on the route is Makali, an hour away from ISKCON. It is at a distance of 22 km. Shivagange is just 45 minutes and 35 km away from Makali.

Shivagange hill is ideal for rock-climbing and trekking. However, the trail is well marked and there are man-made steps to aid the journey to the top. The 2.3 km ascension is at 800 m. River Kumudavathi, which is a tributary of river Arkavathi is said to originate in Shivagange.

Here are other major attractions to visit In Shivagange

The Rock-cut Statue Of Basavanna

One of the main attractions of Shivagange is the rock-cut statue of Basavanna (Nandi). It is a one-of-a-kind statue that is sculpted on steep rocks. The view from this point is splendid. The hillock has many theerthas such as Kanva theertha, Agastya theertha, Kapila theertha, etc.

Olakala Theertha is a spring that flows in the thick of boulders and rocks. This theertha is considered very sacred around here. Patala Gange is another spring that rises from the earth. It is believed that this stream of water is linked to Antargange, where water flows out of the Nandi's mouth perennially.

Gavi Gangadhareshwara Temple in Shivagange, which is dedicated to Lord Shiva, is the first temple you will see during the ascent. It is believed that an abhisheka conducted here to the god with ghee changes to butter. This butter is said to have exceptional medicinal properties. Legend has it that a secret tunnel subsists from this temple to the Gavi Gangadhareshwara Temple in Bangalore!

Devarayanadurga is another famed attraction near Shivagange. It is at a distance of 30 km. It is a small hill station that is famous for its weather and temples. Situated at a height of 3940 feet above sea level, Devarayanadurga is also home to Namada Chillume.