Ancient Forts That Beautify The Incredible Landscape Of Jammu And Kashmir 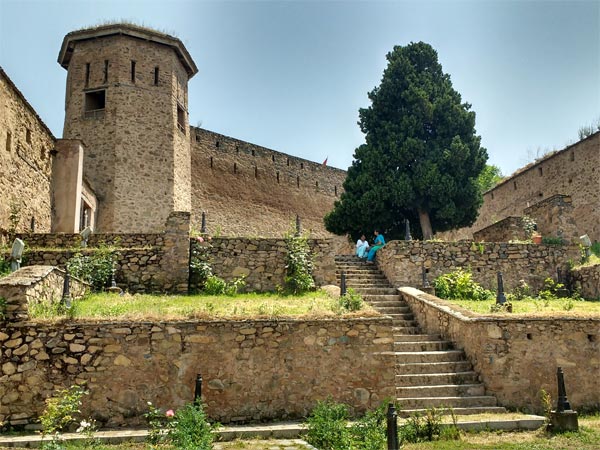 Ancient and historical monuments in Jammu Kashmir nestled amidst incredible natural beauty and views are a standard feature. Gushing streams, snow-capped mountain peaks, lush green forests, and green orchards are some of the features that highlight these surroundings.

These areas are instrumental in defining the serenity of the region and also exhibit the architectural genius possessed by several defining rulers of this beautiful state.

Every fort and palace reflects the distinctive cultural heritage of that place. We have listed some of the famous monuments that dot the verdurous landscape of this glorious state.

Ancient Forts Of Jammu And Kashmir

Placed in the historic town on the Jammu Poonch Highway along the banks of the beautiful River Chenab at the height of 988 feet above sea level. This ancient fort plays a significant role in the history of this town. Mian Tej Singh laid the foundation of this fort in 1762 AD and completed in 1802 AD by Raja Alam Singh.

The fort offers breathtaking views of the Trikuta Mountains, the Shivalik Ranges, and the lush green environment. The palace features a double storey that is separated by a wall. There is also a beautiful courtyard, with the walls decorated with ancient arches and murals.

The Rajput King, Bahu Lochan built this historic fort almost 3,000 forts ago. This iconic fort features in the great marvels of Jammu. Restored and revamped several times by the Dogra Dynasty, the Bahu Fort is placed on the Tawi River overlooking the Jammu city and features beautiful waterfalls in its neighborhood.

The terraced space is further enhanced with the colorful and vibrant flowers. The ancient fort is a favorite pilgrimage spot for the Bahu Temple that is inside the premises of the fort. Several devotees come to the temple to offer their prayers and sacrifices.

Fondly referred as the Chiktan Khar, the Chiktan Fort is situated in the Chiktan village of the Kargil district in Jammu & Kashmir. Balti artisans built this royal castle in the 16th century, and it has served as a royal residence for various rulers that ruled in the region.

Reduced to an ancient ruin today, Chiktan Fort still carries the essence and charm of a historic fort with its mud and stone masonry. Placed inside a deep valley on the banks of the Indus River, with the majestic mountains decorating its backdrop. Timber was used to support the ceilings of the structure and also as door and window frames.

Often referred as the Reasi Fort, the Bhimgarh Fort is placed in the quaint town of Reasi in the Northwest part of the Jammu city. The Dogra rulers used this place to take cover during an emergency. Maharaja Gulab Singh rebuilt this fort using stones, and it took more than 30 years to complete the fort.

The entrance is decorated with Rajasthani carvings from Baluka stone. There is a giant statue of Lord Hanuman and Goddess Mahakali at its entrance. The fort also houses a temple, a pond, and many rooms.

Popularly referred as the Purana Mahal, the Ramnagar Fort was built by Raja Suchet Singh in 1844 A.D. Placed in the neighborhoods of the Sheesh Mahal, famous for the Sati puja performed by his wife. This site has transformed into the Samadhi of the Maharani.

Elevated at the height of almost 828 meters above sea level, the fort nestled amidst green hilly environments from all corners. The stunning wooden ceilings and walls decorated with floral designs and stucco paint are delightful to watch. One can only commute using a narrow bridge to reach this fort.

This ancient fort of Hiranagar gives you a sneak peek into the great history of the Jasrota clan of the Rajput regime. Placed in the Northwest direction of the Hiranagar town towards the India-Pakistan Border on the border road at an elevation of 308 meters above sea level, villages of Suba chak, Jandi, Sanyal, Chanjjal, etc. decorate the landscape of the fort. Raja Hira Singh, son of Raja Dhyan Singh of the Dogra kingdom, is said to have built this fort when he seized power. Raja Hira Singh resided in this historic fort, and the Hiranagar town was named after him in 1947.

One of the top forts in Srinagar constructed by an Afgan Governor named Atta Mohammad Khan in the 18th century. Placed on the Hari Parbhat or the Koh-e-Marian hill towards the west of the Dake Lake, the architecture has vast influences and similarities with several forts embedded in classical Persian style built in Central Asia.

The grand entrance gates of the fortress are named as Kathi Darwaza and Sangin Darwaza, with the former acting as a critical entrance. Sharika Devi Mandir, Gurudwara Chevin Patshahi, and Magdoom Sahib are some of many religious shrines housed in its premises. They also serve as the primary attractions of this fort.