Alwar, The City of Forts 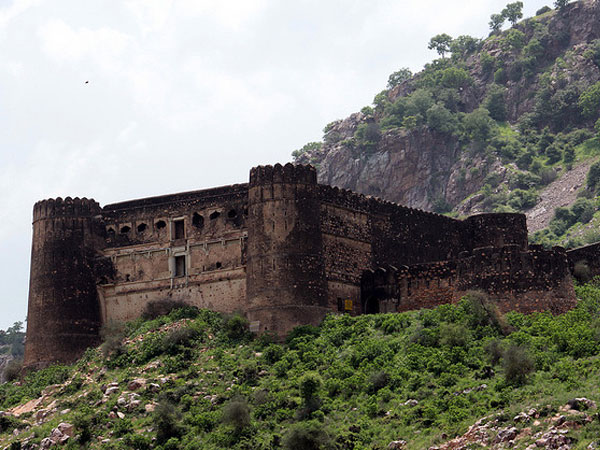 Alwar, a hilly region, located amidst the craggy rocks of the Aravalli Ranges, is a major tourist attraction. Mythological belief persists that this region was known as Matsya Desh where the Pandavas are believed to have spent their 13th year of exile.

Some of the places to visit in Alwar includes the Bala Quila, the City Palace, Moti Doongiri, Bhangarh Fort, Sagar lake and many more. Here is a travel guide to the tourist attractions in Alwar.

By Air: The nearest domestic airbase to Alwar is Sanganer Airport in Jaipur, which is 162 km from Alwar. Foreign tourists can reach the destination from the Indira Gandhi International Airport in New Delhi. This international airport is well connected to major Indian destinations including Kolkata, Bengaluru, Mumbai, and Chennai.

By Train: Alwar Railway Station connects Alwar to Delhi, Jodhpur, Mumbai and other parts of India.

By Road: Alwar is connected to all cities of Rajasthan and to other neighbouring states of India by state owned buses and taxis.

Bala Quila, also known as the Alwar Fort, towers majestically over the hilltop in the city and is a major tourist attraction in Alwar. The monument is famous for its masonry works and grandiose structural designs. There are six distinguished gates namely Jai Pol, Laxman Pol, Surat Pol, Chand Pol, Andheri Gate, and Krishna Gate leading to the fort. The fort has 446 in-built holes for firing guns. 15 magnificent towers and 51 small towers make up this grand monument.

City Palace, also known as the Vinay Vilas Mahal is a magnificent palace and a must visit place in Alwar. This glorious structure is famous for its central courtyard that has a marble designed lotus tower. The palace is a viewer's treat with its mirror and murals work, as well as its splendid range of miniature paintings. The palace treasury has an ornate gold and velvet throne, and a priceless drinking cup cut out of a single emerald! The palace now houses a museum preserving the royal memorabilia, historical exhibits, prized pieces, and some rare manuscripts.

Moti Doongri or the Pearl Hill is popular due to the presence of the palace and shrine. This tourist attraction in Alwar is an imitation of a Scottish castle and was home to Sawai Man Singh II, the last king of Jaipur. A temple dedicated to the Hindu Lord Ganesh is located on top of the hill.

Bhangarh Fort, a tourist attraction in Alwar, is a medieval fort. The fort which is now in ruins is surrounded by a wall in a partially dilapidated condition. The fort premises contain natural springs, waterfalls, gardens, Havelis and banyan trees. Temples of Lord Someshwar, Gopinath, Mangala Devi and Keshava Rai are also present here. There is also a hilltop chhatri, which is secluded from the rest of the area.

Neemrana Hill Fort is a 14th century fort and has now been converted into a heritage hotel. The fort lies on the top of a hill overlooking the village and the surrounding agricultural fields. The fortress was constructed with the intention of providing defence and warfare. With the passage of time, the fort went under the control of different rulers.

Moosi Maharani Ki Chhatri is a striking cenotaph of historical significance. The architectural grandeur gives the monument a spectacular view. The elephant structural design based on pillars of red sandstone is the attention grabbing piece in the monument. The complex also provides a visual treat to its tourists with hundreds of colourful birds and peacocks moving around the place. The picturesque location of the Aravallis, the lush green foliage, and colourful flowers add to the charm of the place.

Sagar Lake is located behind the City Palace and is a must visit place in Alwar. This beautiful lake is considered to be a holy bathing ghat. The banks of the lake are revered as sacred too, and the land is used by devotees for the traditional custom of feeding pigeons. The embankment also has shrines, temples and an array of cenotaphs. The glittering water of the pond along with the gorgeous monuments presents a lovely environment to the visitors.

Comments
Read more about: rajasthan travel nature
Other articles published on Jul 17, 2014
We use cookies to ensure that we give you the best experience on our website. This includes cookies from third party social media websites and ad networks. Such third party cookies may track your use on Nativeplanet sites for better rendering. Our partners use cookies to ensure we show you advertising that is relevant to you. If you continue without changing your settings, we'll assume that you are happy to receive all cookies on Nativeplanet website. However, you can change your cookie settings at any time. Learn more
Change Settings Continue