Nativeplanet
»
Travel guide
»A Blissful Trek To The Tadiandamol Peak

A Blissful Trek To The Tadiandamol Peak 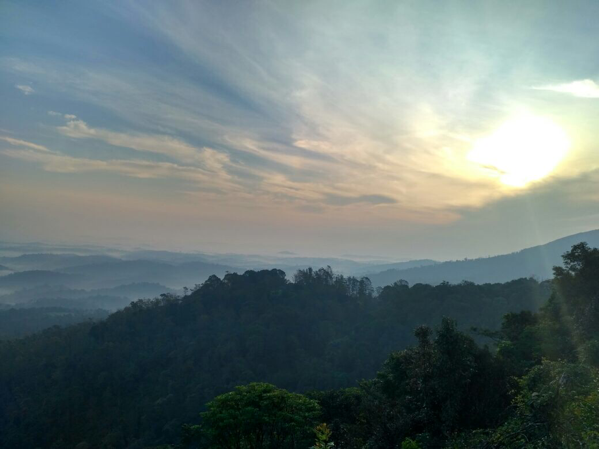 Situated close to the Kerala-Karnataka border, in a town named Kakabe, which is close to Virajpet of Coorg district, Tadiandamol is a blissful trek. I left from Bangalore along with my friends by bus and reached Virajpet at 11:40 am. Tadiandamol peak is located at a distance of about 275 km from Bangalore, a perfect getaway for a weekend.

Kodagu's local cuisine is a haven for non-vegetarians and by what my friends had to say, the pork curry of Kodagu can simply not be missed. Entering a restaurant in Virajpet and asking for vegetarian food is a gamble. However, we landed at a pretty decent tiffin place called Hotel Mookambika and ate our fill.

We booked a homestay called Prabhu's Cottage, which is hardly a kilometre from the bus stand. We did a little bit of local sightseeing for the day, where we visited the St Anne's Church, the beautiful Perambady Lake, clock tower and Pollibetta, which is a picturesque tea estate that is spread with lush greenery. Then we retired for the day.

On day 2, we started for the trek at 5:45 am. We travelled to the starting point in a jeep which is located at a distance of about 3 km. There is a toll on the way of Rs 20 per person. A brownie point in the journey was the dog that followed and guided us to a certain point.

The entire distance of the trek is about 7-8 kilometres. It is a relatively hassle-free trek since there are boards to guide you all the way, specifying the distance left to be completed. A campsite called Big Rock is located about 1.5 km from the peak. One can climb on it and witness the enchanting serenity of Mother Nature.

A tip about the trek is to avoid taking it up during monsoon; the place tends to be crawling with leeches. The best part about the already mystifying trek was that the weather was really kind to us. We were blessed to have a balmy climate that enhanced the beauty of the trek.

The last 1 km is pretty tiring and very deceiving. Towards the end of the trek, you may find a kind of a peak, which in fact is not the final destination. The real peak has a board that says 0 km Tadiandamol. Upon scaling the peak, your vision is your reward! Breathtaking views of the entire valley of green, coupled with the misty climate are what you get.

After spending some time revelling in the secluded peak we headed back. The trek duration was around 7 hours. We returned to the starting point by 1 pm.

On the way back home, we stopped by the Nalknad Palace, a refuge of King Chikkaveera Rajendra between 1792 AD and 1794 AD. The place had a guide who took us through all the rooms and showed us the paintings and designs from that era that are now thoroughly faded and in some cases defaced and scribbled on by tourists.

We also had a look at the beautiful Chelavara Falls that was en route. Since the place was crowded with people, we didn't get a chance to take a dip in the water. However, the view of the falls was absolutely stunning. We returned to Virajpet, where we had lunch at Hotel Badriyas. The place had real good food for vegetarians as well.

Finally, we left our homestay, got the bus at around 11:45 am and returned on the 22nd. For a pleasant, easy and satisfying trekking experience, Tadiandamol is certainly the place you need to go to.

Comments
Read more about: trekking coorg karnataka adventure nature bangalore weekend getaways
Other articles published on Oct 30, 2017
We use cookies to ensure that we give you the best experience on our website. This includes cookies from third party social media websites and ad networks. Such third party cookies may track your use on Nativeplanet sites for better rendering. Our partners use cookies to ensure we show you advertising that is relevant to you. If you continue without changing your settings, we'll assume that you are happy to receive all cookies on Nativeplanet website. However, you can change your cookie settings at any time. Learn more
Change Settings Continue