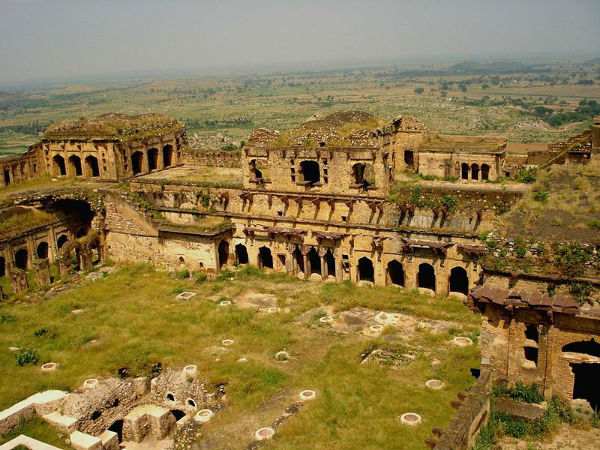 Nestled in the heart of India, Madhya Pradesh is a state named according to its geographical location (Madhya means middle). It is one of the few states of India that is surrounded by states on all its sides, without sharing its border with another country. This magnificent state is famous for its many historical temples and cities.

Bhopal is the capital while Indore is the largest city in Madhya Pradesh. Ujjain is a popular sacred site for Hindus and Gondwana is believed to be one of the oldest regions that belonged to the Gond kingdom. Therefore it is safe to say Madhya Pradesh has it all!

While every tourist knows places such as the Khajuraho Temples, Orchha, Bhedaghat, to name a few, there are quite a few places in this state that might intrigue the explorer in you! Here are some of those places that you can visit on a trip to Madhya Pradesh.

An abode of a plethora of regal temples, Bateshwar is a town situated about 40 km from the Gwalior city. These temples dates back to the period between 8th to 11th century and were built using sandstone. These temples are even older than the famous Khajuraho Temples, by at least 200-300 years!

Most of these temples are still in a healthy condition, and are dedicated to Lord Shiva and Vishnu. Bateshwar once used to house 101 temples out of which 42 of them continue to stand.

Shivpuri once used to be the summer capital of the Scindias rulers from Gwalior. It is a beautiful city surrounded by lush deciduous forest, which is a favoured monsoon destination due to the many minor waterfalls and lakes.

This off-beat destination is home to the Madhav Vilas Palace, the place where the Scindias used to live. It which is now a prime tourist attraction due to its magnificent colonial architecture, and the pink hues add to the beauty of the palace. Karera Bird Sanctuary is another place of interest in Shivpuri.

Yet another beautiful place of Madhya Pradesh is Bhind, known to be home to a number of beautiful temples. The Chhatri of Malhar Rao Holkar can be found At Alampur in Bhind. A Chhatri is a dome-shaped canopy, an important element of many architectural monuments of India.

Ater Fort, Shri Rawatpura Sarkar Dham and a number of Jain Temples are some of the other places that must be visited, if you're at Bhind.

The town of Burhanpur is unique because of its connection with the Taj Mahal. It is the place where the Mughal Emperor Shah Jahan's beloved wife Mumtaz Mahal died while giving birth to their 14th child. Therefore, a very strong influence of Mughal architecture can be witnessed in this town.

Settled on the east of the River Tapi, Shahi Qila is a beautiful fort built during the Farooqi Dynasty but later resided by Shah Jahan. It is locally known as Bhulbhulaya which means "labyrinth" due to its tricky and boggling architecture! Although mostly in ruins, the beauty of Shahi Qila still remains unparalleled.

Asirgarh Fort, Dargah-e-Hakimi, Shahi Hamam are some of the other places to visit here.

Chanderi is a historical town located in the Ashoknagar district of Madhya Pradesh. This off-beat destination is well-known for the production of handwoven sarees. Chanderi used to be the centre of Jain culture, which can be seen in the many number of Jain temples that are found here.

Mandu is also a place that reflects architectural brilliance of the town's ancestors. This hilly town situated about 60 km from Indore, is home to breathtaking monuments such as Baz Bahadur's Palace, Jahaz Mahal, Hindola Mahal built in the 10th century.These ancient structures of Mandu make it an ideal destination for history buffs.

The Hindola Mahal, also called as the Swing Palace used to be the place of leisure for the Mughals. The Jahaz Mahal is built on a small strip of land and has an upper storey which altogether makes it look like a ship's bridge, therefore it is also known as Ship Mahal.

Popular for being the only site of diamond mines, Panna is now mainly famous for the Panna National Park. This park which is mainly a tiger reserve is settled along the tranquil river Ken on the Vindhya Hills. The park is filled with gorges, mesmerizing waterfalls and lush thickets of forests.

You cannot miss Khajuraho Temples located just about 45 km from Panna if you ever visit this diamond city of India!

Being once the capital of the royal kingdom of King Bhoj, Dhar is a charming old town located 35 km from Mandu. Dhar Fort built by Muhammad Tughlaq in 1344 AD is the main attraction of the town. The fort was constructed using red and black stones, and Islamic style of architecture is evident in the fort.

Dhar Fort is much in ruins today, but it makes for a brilliant visit to understand the history of the place. The fort is located just 3 km from the town centre.

Formerly known as Tehri which means "triangle", Tikamgarh used to be a part of the Orchha kingdom. It was known as Tehri since it is a group of three hamlets. The off-beat town oversees a beautiful view of the Mahendra Sagar and also has the ruins of Garh Kundar Fort.

Tikamgarh was established by Rudra Pratap Singh who was a king of the Bundela dynasty.