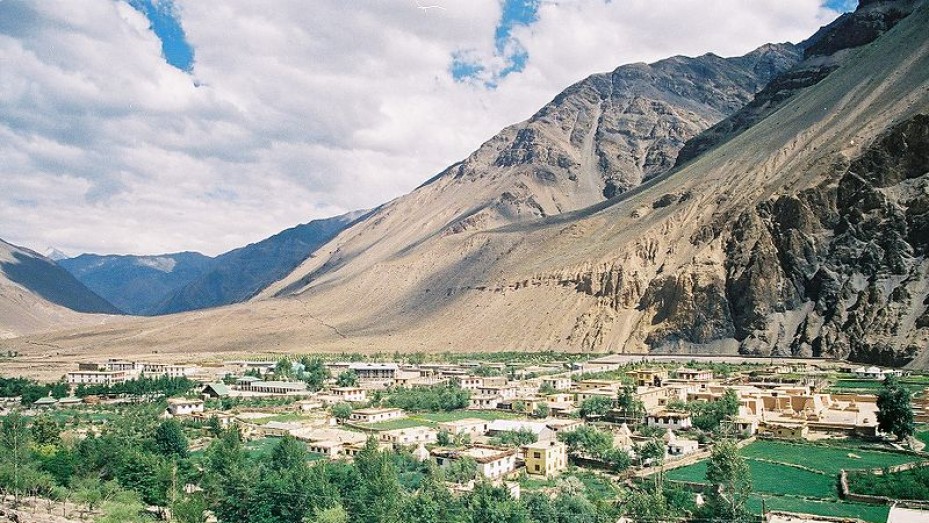 Tabo is a popular tourist destination located in the Spiti Valley of Himachal Pradesh. Perched at an elevation of around 3050 m above sea level, the town offers picturesque views to visitors. Situated in the Lahaul and Spiti District, Tabo lies on the banks of river Spiti and is surrounded by brown hills.

Tourist Places In And Around Tabo

The Tabo Monastery, believed to be built around one thousand years ago, is deemed as the largest royal complex in the Spiti Valley. It sprawls over an approximate area of 6300 sq m, which is environed by a mud brick boundary wall. Constructed in 996 AD, this monastery houses 9 temples and 23 chortens along with a monks’ chamber and a nuns' residence. The monastery is popularly known as the Tabo-Chos-Khor, which stands for the doctrinal circle.

An architectural marvel, this monastery is famous for its magnificent sculptures, stucco images and wall paintings similar to those of the Ajanta and Ellora caves. It is because of this that Tabo has been given the title of Himalayan Ajanta.

Amongst the prominent temples of the ancient monastery in Tabo, the Temple of the Enlightened Gods, the Golden Temple and the Mystic Mandala Temple are worth mentioning. The Temple of the Enlightened Gods, also known as the Tug-Lha-khang, has an assembly hall, a sanctum and an entrance hall. A four-fold figure of the Vairocana, one of five spiritual sons of the Adi-Buddha, sits in the assembly hall.

Originally constructed using pure gold, The Golden Temple was modified in the 16th century by Sengge Namgyal, an erstwhile king of Ladakh. The Mystic Mandala Temple, also known as the Initiation Temple, displays a huge painting of the Vairocana surrounded by eight Bodhisattvas or enlightened beings.

The Bodhisattva Maitreya Temple is popular for a gigantic 20 ft tall statue of the Maitreya Buddha, also known as the Laughing Buddha or the Buddha of the Future. Carved doorways and picturesque mural paintings on the walls are the highlights of The Temple of Dromton, which is also known as the Brom-ston Lha-khang. The Larger Temple of Dromton, a later addition to the complex, is the second largest temple located in the Tabo Monastery complex with a floor spread over 70 sq m. The portico along with the niche of the temple adds another 42 sq m to the size.

The Mahakala Vajra-bhairava Temple has been christened as the Temple of Horror. It is named so because it houses numerous idols of protective deities of the Gelukpa sect of Buddhism that are known for their ferocity.

Apart from various temples, Tabo Monastery consists of numerous Tibetan paintings that are displayed for visitors in The Chamber of Picture Treasures, which is also known as the Z'al-ma.

How To Reach Tabo

Tabo is well connected by the major modes of transportation, namely air, rail and road. The nearest airbase is Kullu airport that is located at a distance of 294 km. On the other hand, the closest railhead is Kalka railway station that is 452 km away from Tabo.

Tourists are advised to visit the destination during the summer season, which commences from the month of March and lasts till June. During the winter season, it is hard to reach Tabo due to the heavy snowfall.

Tabo is Famous for

How to Reach Tabo