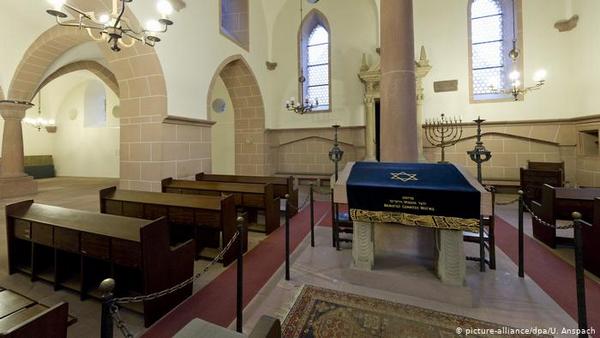 UNESCO, the United Nations (UN) cultural body, announced that two sites in Germany had been awarded World Heritage status on Tuesday. Committee members recognized the German cities of Mainz, Speyer and Worms for their role as centers of European Jewish culture in the Middle Ages - the first ever UNESCO recognition of Jewish cultural heritage in Germany.

They also approved applications for the recognition of a section of the Limes - the exterior border of the Roman Empire - along the Rhine River.

What Are The Jewish Centers With UNESCO Status?

Mainz, Speyer and Worms are known as the SchUM sites - for the first letters of their medieval Hebrew names. The three cities form part of what was once referred to as "Jerusalem on the Rhine."

They were highly influential in their contributions to Jewish language, religious studies and religious architectural style.

The state of Rhineland-Palatinate fought for recognition for more than 15 years. Advocates noted that their biggest problem was the fact that so few physical artifacts remained after centuries of plundering and destructive vandalism.

Ultimately, the committee recognized cemeteries, a synagogue and Mikvah ritual baths in the cities as worthy of the World Cultural Heritage moniker. The Heiligen Sand (Hallowed Sand) cemetery in Worms, for instance, is often considered the oldest and largest Jewish cemetery in Europe, with graves dating back to the ninth century.

Lack of preserved historical sites, says Andreas Lehnardt, a professor of Jewish studies at the Johannes Gutenberg University Mainz, is often a disappointment for foreign guests seeking to connect to the region's rich Jewish past, "but," he adds, "that is simply a reflection of Jewish history in Germany."

Supporters of the application, such as Worms Mayor Alfred Kessel, say the UNESCO distinction will not only help attract tourists, it will also help communities protect what remains of what was once an important center of Jewish culture and theological teaching.

What Is The Section Of The Limes With UNESCO Status?

The Lower German Limes stretches from Rheinbröhl in the state of Rhineland-Palatinate, through North Rhine-Westphalia to the North Sea in the Netherlands. Its recognition advances the body's vision of putting the entirety of the military border - which stretched from Scotland to the Black Sea - under protection as a pan-European cultural heritage site.

Maria Böhmer, president of the German Commission for UNESCO, said that some of the "oldest remnants of the edge of the Roman Empire" are to be found at the site.

"The Romans built forts and settlements along the Rhine that would grow to become major cities like Cologne, Bonn and Nijmegen. They blossomed because the Limes was not a closure but rather always facilitated exchange between Rome and its neighbors."

Despite being a border, the Limes was not simply a static line of defense but rather a place of exchange, with customs collected and markets set up at border crossings, and watchtowers and forts spaced out along the structure.

A decision on a further section, known as the Danube Limes, was handed to a working group for reconsideration.

Hungary torpedoed the proposal - put forth by Germany, Austria, Slovakia and Hungary - by unexpectedly withdrawing its portion of the application. That accounts for some 400 kilometers (248 miles) of wall and 98 of the 175 Roman sites named in it. The committee called the move "unprecedented."

UNESCO members will continue to work both virtually and in Fuzhou, China, until Saturday. The committee's annual meeting was postponed last year due to the coronavirus crisis. Currently some 1,110 Cultural and Natural Heritage Sites exist, with 50 of them in Germany - 51 other sites around the globe are under threat according to UNESCO officials.