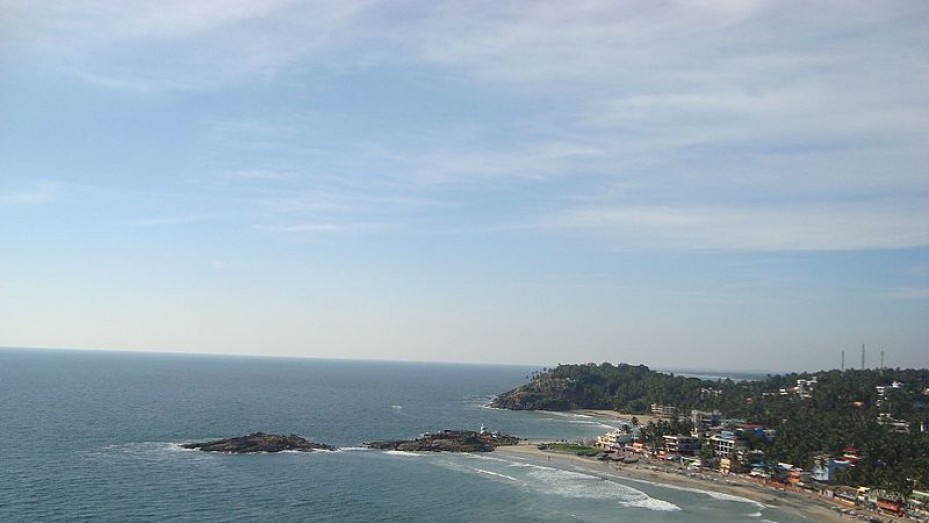 Kovalam is a well-known beach town situated near Thiruvananthapuram (erstwhile Trivandrum), the capital city of Kerala. The town stands facing the mighty Arabian Sea. The beach is not very far from the main city of Thiruvananthapuram; 16 km is all it takes for you to reach the picturesque beach of Kovalam from the city centre.

The word ‘Kovalam’ is derived from a Malayalam word, which means ‘a grove of coconut trees’. The name is very apt for the town since it has abundance of groves of coconut trees. Like Kashmir is considered ‘Heaven on Earth’, Kovalam is referred to as the ‘Paradise of the South’.

History enthusiasts have mobbed the town of Kovalam because of the history attached to the place. It is believed that Kovalam first gained importance after the Regent Maharani Sethu Lakshmi Bai, who was the ruler of Travancore, got a beach resort constructed for herself in the town sometime in the 1920s.

This beach resort still stands in Kovalam and is called the Halcyon Castle. Kovalam again gained prominence when the Maharani’s nephew, the Maharaja of Travancore, became a regular visitor to this beach town and became a patron of the local arts and crafts.

However, the town gained immense popularity, thanks to the European guests of the Kingdom of Travancore. By the 1930s the town had established itself as a popular beach destination for tourists from European countries. Kovalam saw a significant phase in the history of the world during the 1970s when the hippies decided to make it their centre of activity.

Plenty of hippies arrived in Kovalam as part of the Hippie Trail that was on its way to Ceylon in Sri Lanka. Suddenly the place was transformed from a sleepy fishing village to a significant tourist hub. Even now there are plenty of European and Israeli tourists who regularly visit the town every year or every alternate year.

The City Of Beaches - Tourist Places In And Around Kovalam

The splendid scenic beauty of this town lies in its beaches. A walk on the warm sand beside the gently rising waves is a once-in-a-lifetime experience. When you visit the beaches of Kovalam you will be able to understand the famous lines “A thing of beauty is a joy forever”. Indeed the combination of lush green and serene blue is beautiful enough to fill your heart with joy.

Kovalam has three main beaches, and the best time to visit the beaches is either early morning or late evening because this way you can catch the beautiful sight of the rising of the sun or the setting of the sun.

A peculiar thing about the beaches of Kovalam is the colour of the sand on the beaches. The sand is slightly coloured black. This feature has been attributed to the subsistence of Monazite and Ilmenite. The three beaches run alongside each other and cover around 17 km of the coast line. Separating the three beaches are mighty rocks.

One has to be very careful when hopping from one beach to another because the rocks are very slippery and one missed step can spoil your vacation. The three beaches are the Lighthouse Beach, the Hawah Beach and the Samudra Beach.

You should make it a point to visit all the three beaches when in Kovalam because each beach has its own scenic view to offer. The Light House Beach happens to be the largest of all the three beaches. The beach is named thus because of a light house that stands some 35 m high on top of the Kurumkal hillock.

The Hawah Beach is the second largest beach and derives its name from the topless sunbathing that used to take place there. Mainly European women could be seen topless on the beach. Interestingly, Hawah Beach was the first and the only topless sun bathing beach in India.

However, sunbathing without clothes has now been banned on the beach. Only private resorts allow topless bathing and sun bathing and the coves owned by the resort for this purpose are not open for the general public.

The Lighthouse-beach/" title="Lighthouse Beach">Lighthouse Beach and the Hawah Beach receive the maximum number of tourists. The Samudra Beach is located towards the northern part of the coastline. The name of the beach is a colloquial term that the early visitors had kept for the place. Unfortunately, the beach does not see as heavy activity as does the other two beaches.

This is one reason the local fishermen prefer fishing on this side of the coast. Apart from the three beaches there is another beach that is also a part of the Kovalam coastline, the Ashoka Beach. But like the Samudra Beach, tourists don’t throng to the Ashoka Beach either. You will mainly find honeymooners, who are looking for private time, strolling on this beach.

How To Reach Kovalam

Kovalam is easily accessible from Thiruvananthapuram and can be reached by air, rail and road.

Kovalam sees a lot of tourist activity from September to May.

Kovalam is Famous for

How to Reach Kovalam