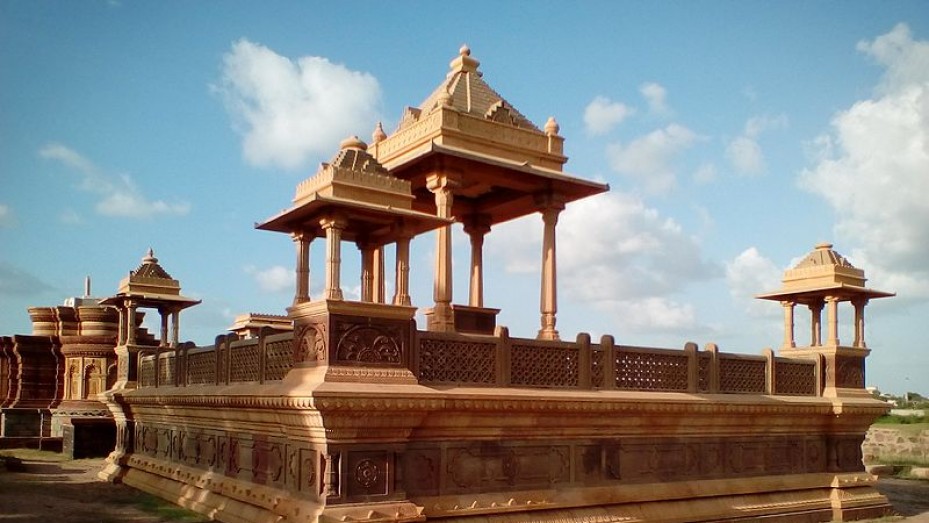 Bhuj is a city with profound historical background and also the district head-quarters of Kutch. The city's name is attributed to the hill named Bhujiyo Dungar, which is at the eastern side of the city and also considered to be the place of the Great Serpent Bhujang. A temple dedicated to him stands at the top of this hill.

Bhuj has a strong connection with the Indian history, starting from the pre-historic days. From the Indus Valley Civilization and Alexander the Great's reign, to the Jadeja Rajput, the Gujarat Sultanate and the British rule, Bhuj has witnessed all phases of history.

In the 18th century, Rao Godiji built the fort of Bhuj, in order to protect Kutch from the then political situation which arose due to the decline of the Mughal Empire. This fort had 11 m high walls and 51 guns around the city.

Tourist Places In And Around Bhuj

There are numerous historical places in Bhuj to visit. The Sharad Baug Palace was the king’s residence till 1991 when the last king of Kutch, Madansingh, died. The Aina Mahal or the Hall of Mirrors, built during the reign of King Lakhpatji by the master craftsman Ramsinh Malam.

The bell tower of the Prag Mahal was commissioned by King Pragmalji and designed in the Italian Gothic style. The Ramakund stepwell, which has many sculptures of characters from the Ramayana and the Royal cenotaphs or the Chhatardis. Other than these, there are the 2000-year-old Kshatrapa inscriptions in Kutch Museum and the Hamirsar Lake- alongside which all the above monuments are located. The Swaminarayan Temple here has brightly coloured woodcarvings around the building, mostly depicting stories of Lord Krishna and Radha.

In Bhuj, the Swaminarayan Sampraday is very famous as their first and main temple is located here. The predominant religions of Bhuj are the above mentioned form of Vaishnav Hinduism, Jainism and Islam. There is a Sikh Gurudwara in Lakhpat. This gurudwara is the place where Shri Guru Nanak stayed when he visited Kutch.

Khavda is a famous natural park near Bhuj. Khavda is situated 72 km north of Bhuj and is famous as the departure point of the world’s largest flamingo colony. There is a lake in the desert at Jamkundaliya, where half a million flamingos take rest in between the journey while migrating every year.

One can reach the flamingo colony by a camel ride, and the best time to visit is in the winter during the months of October to March. Chhari Dhandh is another eco-tourism center situated around 80 kms North-West of Bhuj.

The meaning of the word 'Chhari' is 'salt affected' and of 'Dhandh' is 'shallow wet-lands'. This place is a salty wetland, where tourists and bird watchers can find 370 different bird species, especially raports, water fly, waders and larks.

The highest point in Kutch is the Black Hills, which is 25 km north of Khavda. Here, the entire northern horizon disappears into the Great Rann, the desert and the sky cannot be separated any longer. One can get closest to the Pakistani border in this spot. There is an Army post at the top of the Black Hills; only military personnel are allowed beyond that post.

There is a 400-year-old temple of Dattatreya, the three-headed incarnation of Lord Brahma, Lord Vishnu and Lord Shiva in the same body, on top of this hill.

Bhuj is also famous among tourists for its handicraft work, which is known as Kutchi embroidery. Bhuj is a place which, with all its pre-historic connections, has developed during the centuries. With a wide range of experiences to offer, Bhuj is definitely a favourable tourist location.

How To Reach Bhuj

Conveyance is easy to Bhuj, as it has its own airport. Rail and road transport is also available from the major cities of India.

The weather condition at Bhuj is variant throughout the year.

Bhuj is Famous for